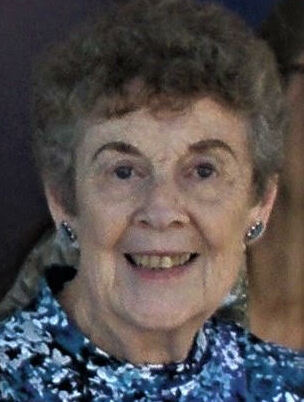 Shirley Dickinson Erhart passed away at her home on July 13, 2022, resulting from complications following a hip fracture. Family was with her continually during her last days and hours. Shirley Alice Dickinson was born to Alfred and Louise Dickinson on December 15, 1929, in the apartment above the first gas station in Union, Washington, built by her auto mechanic father, Al Dickinson. By the time she was in first grade, Shirley’s family had moved into a house behind Irene S. Reed High School (now Timberland library) in Shelton where they remained until Shirley graduated in 1949. Following graduation, Shirley attended Western Washington College of Education for a year before marrying her Shelton beau, Robert Erhart. Bob became a Washington State Patrolman, and was assigned to both South Seattle and Skagit Valley before he and Shirley returned to Shelton with their five children in 1966. Following her divorce from Robert Erhart in 1975, Shirley began attending classes at The Evergreen State College, eventually earning her BA. While the kids were still in school, Shirley became employed by the Shelton Library, ultimately staffing the reference section. After retirement, Shirley returned to the little white former library building on Railroad Avenue as a researcher for the Mason County Historical Museum, a position that she continued to enjoy part time until she was 90 years old. Shirley’s zeal for local history and her research skills were legendary, and numerous families and authors sought her assistance in their quests for local or family history information. Shirley was also a dedicated family historian, meticulously creating large albums about each ancestor, which she circulated among relatives who showed any interest at all in family history! Shirley had an insatiable appetite for reading, especially historical fiction and books about Northwest history. She was always seeking out her next read, leaving among her personal effects a pile of notes about books she had either heard about or read reviews of. The flowering plants on her front and back porches were one of Shirley’s ongoing pleasures. Even when using a cane and then a walker, she somehow managed to get outside to look at and tend her many pots, and then later made sure that her family was taking proper care of them every day. A devoted mother, Shirley guided, advised and enjoyed the company of her children. Surviving to mourn her loss are: Robin Kramer (Larry), Olympia; Wendy Gardner (John), Olympia; Lee Erhart, Shelton and Toby Erhart, Shelton. Shirley is also survived by grandchildren Allan Erhart, Thomas Sayan, Aimee Sayan, Anders Erhart, Cary Kramer, Abram Erhart, Adrian Erhart, Audrey Erhart and Tyler Erhart, seven great-grandchildren, and nieces and nephews. Shirley was preceded in death by son Thomas, sisters Chloe Scoles and Beverly Dunbar, and grandson Gabriel Sayan. Donations in Shirley’s name may be made to the Mason County Historical Museum.