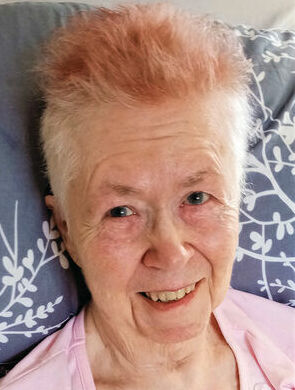 Please share a memory of Peggy to include in a keepsake book for family and friends.
View Tribute Book
Peggy Marie Squires passed away December 17, 2022. She was born in Meeker, Colorado on July 31, 1940, to Dallas Morgan Wells and Ruby Ruth Carr. She and her parents moved from Colorado to Oregon before she started elementary school, and they lived in Eugene and Corvallis, moving back to Eugene when Peggy started high school. Peggy attended Willamette High School for a short time and graduated in 1958 from South Eugene High School. After graduating from high school, she attended Eugene Business College where she met Richard Doyle Squires. Peggy and Richard married on February 13, 1960. Peggy and Richard had two girls, Felicia and Shelley. After both girls were in elementary school, Peggy worked for the Bethel School district as a teacher's aide until 1979, when she began working for Northwest Christian College (now Bushnell University) in the registrar's office. In 1988, Richard and Peggy sold their first home and moved to Shelton, Washington with their granddaughter, April Jacobsen. In Washington, Peggy worked for USDA-APHIS-Washington State as an office support assistant. She retired on January 31, 2006. Peggy was a life-long caregiver, of her children, her grandchild, April, and her great-grandchild, Ashlyn, as well as for Richard, especially near the end of his life. The first thing you would notice about Peggy was her beautiful smile. She was also known for giving great hugs and making the best pies ever. She cared about people and even in her last months, made sure that she asked her caregivers about their families and their lives, promising to pray for them when they were going through difficult times. Peggy had many dear friends and loved walking with them and playing Bunco. She was also a prolific embroiderer, and many of us have samples of works she created. Although we are thankful that she is no longer suffering, we will miss her dearly. She was preceded in death by her parents, Dallas and Ruby, her husband, Richard, and her daughter, Shelley. She leaves behind her daughter Felicia, and her husband Charles and children, Bryan, Benjamin, and Jayson. She also leaves behind her granddaughter April, and her life partner Daniel and daughter Ashlyn. Additionally, she leaves behind Shelley's daughter Faith, her three children, Hillary, Mazzy, Javen, and Hillary's daughter, Ani. A celebration of life will be held January 8, 2023, at Gateway Christian Fellowship in Shelton Washington at 3:00 p.m. The family asks that in lieu of flowers, donations be made to Kitten Rescue of Mason County. https://www.kittenresq.net/donate
To plant a beautiful memorial tree in memory of Peggy Squires , please visit our Tree Store

Look inside to read what others have shared
Family and friends are coming together online to create a special keepsake. Every memory left on the online obituary will be automatically included in this book.
View Tribute Book
Services for Peggy Squires
There are no events scheduled. You can still show your support by planting a tree in memory of Peggy Squires .
Plant a tree in memory of Peggy
Share Your Memory of
Peggy
Upload Your Memory View All Memories
Be the first to upload a memory!
Share A Memory
Plant a Tree
McComb & Wagner Online Store
Simple. Economical. Respectful. Since 1897
Visit Our Store